Skip to content
Call a Tow Truck Near You

A truck driver recently found himself in dire need of a heavy tow company after his excitement for lunch resulted in a rollover. With a large load on the back and a schedule to keep, the driver made the call to Interstate Towing. We were able to respond quickly to upright the tractor trailer and help the driver reach his Chic-fil-a lunch.

The call for a quick heavy tow company came in right around lunch time. While attempting to exit the roadway along Route 8 and 82 in Macedonia, the truck driver pulled over too quickly. This resulted in the truck rolling over on its side. Fortunately, as a trusted heavy tow company, our crew responded within fifteen minutes to make things right again.

Although the rollover did not block traffic, the heavy tow company team had to carefully consider how to navigate the issue of the two 24,000 pound aluminum coils being transported. After a quick assessment of the scene, Interstate heavy tow company brought in some heavy duty tow equipment to accomplish the job.

As one of the massive aluminum coils had fallen off and the other had stayed on, the first concern was disconnecting these to make the recovery process easier. Using the large rotator, the coils were picked up and placed to the side to make way for uprighting the truck.

The heavy tow company driver hooked the overturned tractor trailer to the 80-ton heavy wrecker and pulled it upright with winches. It was first lifted into the air and then set back down onto the roadway. A rollaway truck and trailer were used to transport the large aluminum coils, while a flatbed truck hauled away loose debris from the rollover.

With some quick problem solving and the right equipment, the heavy tow company team was able to get the semi back on solid ground in no time. 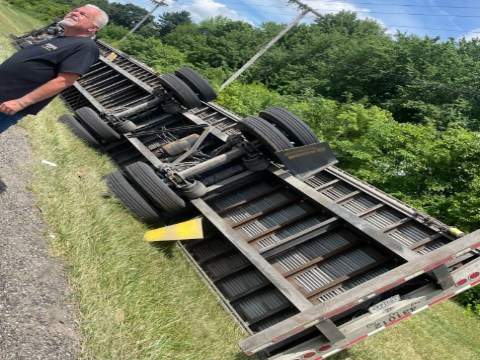 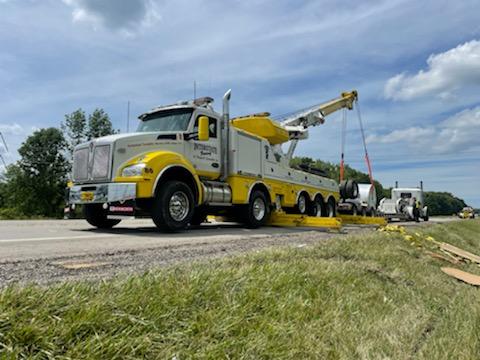 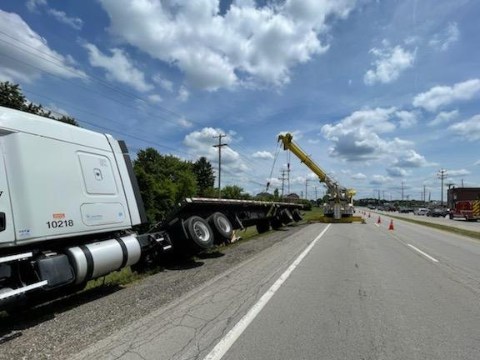 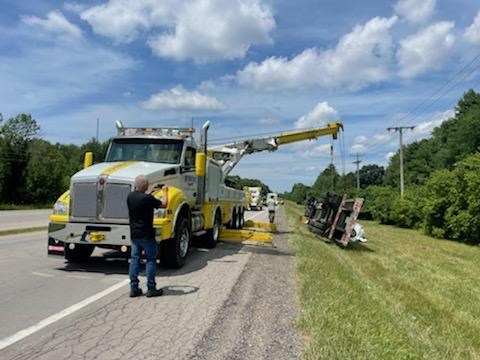 Interstate Towing responded to a caller in need of heavy tow company truck service to upright a semi-truck that was sitting on its side. The customer had been attempting to exit Route 8 and 82 in Macedonia to make a stop at Chic-fil-a for lunch. He swerved to the side of the road quickly, overturning the truck onto its side. The truck driver called Interstate heavy tow company for quick assistance.

With the help of an 80-ton heavy wrecker, the heavy tow company winched the truck back into the upright position by first lifting it into the air before placing it back down on all four wheels. The tractor trailer and its aluminum coil contents were towed away from the scene by the heavy tow company. A flatbed hauled away debris from the rollover.

Once the job was complete, the Macedonia heavy tow company returned to Interstate Towing to prepare for the next job.