Skip to content
Call a Tow Truck Near You

Interstate’s heavy duty towing team had the pleasure of moving a 1928 passenger car to its new home. The railroad car was sitting on train tracks in Orrville, OH, and put up for sale. While it had definitely seen better days, someone saw potential in the rusty green train car.

The new owner planned on restoring the train car to its former glory and then converting it into a restaurant! He had a beautiful spot picked out for the restaurant but needed to overcome one major hurdle: moving a 125,000 lb train car 70 miles to Amherst, OH!

The heavy duty towing team was tasked with lifting the passenger car off the tracks and onto an awaiting lowboy trailer. The team would then meet the lowboy in Amherst and help offload the train at it’s new home.

The tricky part would be getting the 93 year old passenger car onto the new tracks it would call home. While the team was able to lift one end and pivot the train car onto the lowboy, they needed to lift it completely into the air to get it to it’s designated spot.

The passenger car was very top heavy and the only safe lifting points were situated at low points on it. Using three rotators, the team slowly lifted the passenger car into the air. Every move they made had to be slow and calculated in order to maintain the balance on the car.

One wrong move could have meant disaster! Interstate’s heavy towing team never rushes a job. They took their time and successfully moved the train car to it’s designated location. Great work out there team! 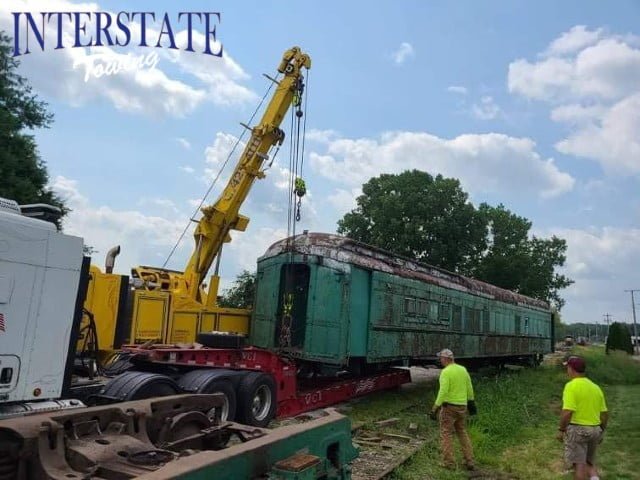